Located in a suburb of Toronto, the home was commissioned by a family that wanted a design to break from the "monotony" of the surrounding neighbourhood.

"The clients sought a design that would provide them with a sense of place — a year-round 'cottage in the city' was the brief," said the studio.

"The site, a post-war suburb north of Toronto, while generous in proportion is perfectly flat," said architecture studio Agathom. "Long ago the traces of its rich natural history were erased, and any other human histories with them."

"The intent of the design from the first sketches was to re-introduce place to the land," the studio added.

The 4,900 square-foot (455 square-metre) house consists of a series of irregular volumes topped by faceted roofs. Agathom likened it to a tent draped over several smaller shapes.

"Dove was conceived as a series of interconnected tents or pavilions in the landscape, rather than rooms filling out a shell," the designers explained.

"Each space is independently situated and connected to multiple routes, so that each main room becomes a destination," the studio added.

The steel-and-concrete house was organised around separate living and dining rooms, which are anchored by abutting fireplaces.

Each of these primary spaces is separated by a short flight of steps, creating a clear distinction between them.

The remaining part of the ground floor is occupied by a dine-in kitchen and breakfast room. Because of the roughly L-shaped organisation of the plan, all of the living spaces lead onto a back patio and swimming pool.

"The heart of the home wraps around back-to-back fireplaces like a gathering place at a clearing in the forest," said Agathom. "Natural light is celebrated through unexpected glimpses, washing walls and reflecting off surfaces."

A light-hued wooden staircase leads residents up to the home's three bedrooms, which share a landing on the smaller upstairs level.

"The experience of moving through the project was envisioned as a walk-through Ontario woods and meadows — gently up over logs, with low canopies dramatically sweeping to towering heights, squeezing through rock canyons, passing water streams – all lit from unusual places," said the architecture studio.

A covered path leads from the kitchen and breakfast room towards the greenhouse. This standalone structure has angled walls that echo the geometry of the main home. 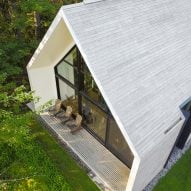 In certain areas, concrete structural elements also provide built-in seating. The concrete is printed with deep grooves, lending it a vertical texture that appears throughout the project.

Agathom Co. was established in 2005 by Adam Thom and Katja Aga Sachse Thom and is based in Toronto. The architecture studio has also completed an artist's cabin in the forests of British Columbia for a client that requested a compact structure that would receive ample natural light.

Other residential projects in Toronto include a beach house on the shores of Lake Ontario by local architects Odami and a home with a textured brick facade by Batay-Csorba Architects.