A proem, the dictionary tells us, is an introduction, a preamble, a preface. When Marie Trohman (wife of the lead guitarist for Fall Out Boy) and Ashley Drost founded their Los Angeles–based design practice in 2017, they named the firm Proem Studio as a tip of the hat to new beginnings. “A lot of clients come to us looking for a fresh start after some major change in their lives. Proem felt like the right message—the beginning of a new chapter,” Drost explains.

As so it was for Trohman and her husband, Joe Trohman, when the couple relocated from New York to L.A. in 2013. The renovation of the Trohmans’ home in Los Feliz—a classic L.A. Spanish-style abode built in 1929—was one of Proem’s first major collaborations. “There were specific things Joe and I wanted, like a pool and a music studio, but we also wanted to connect the house to the land in a more meaningful way. In everything we did, we tried to tie the DNA of the late-1920s and ’30s to more modern touches,” Trohman says.

In the living room, for example, Trohman and Drost replaced the overwrought fireplace surround and mantel with a far more streamlined design executed in white plaster. “It had been touched too many times over the years, so we wanted to bring it back to something more sympathetic to the period architecture,” says Drost. As a counterpoint to the house’s historic bones, they outfitted the room with midcentury treasures by the likes of Marco Zanuso, Joe Colombo, Paavo Tynell, and Gunnar Nylund. A Louis Philippe mantel mirror exudes just the right perfume of antique loveliness, while contemporary artworks by Urs Fischer and others keep one foot firmly planted in the present. A Lalanne-ian sheep—“It came from Ukraine,” Trohman says, laughing—caps off the centuries-spanning ensemble.

The same sensibility—juxtaposing distinctly vintage and contemporary pieces against the placid backdrop of period architecture limned in white plaster—extends throughout the home. In the entry, a warped mirror by experimental industrial designer Christopher Prinz and a curious 1960s Italian round-back chair gently activate a traditional Spanish-style entry hall. In the dining room, an 18th-century French table is ringed by Nickey Kehoe chairs beneath Lindsey Adelman’s Terrarium lights, with artworks by Raymond Pettibon and Pieter Hugo to enliven the finely calibrated mix. The Kelly Wearstler Graffito wallpaper that covers the entry powder room, as well as the classic Dieter Rams bookshelves that line the upper hall, make particularly amiable companions to the architecture. 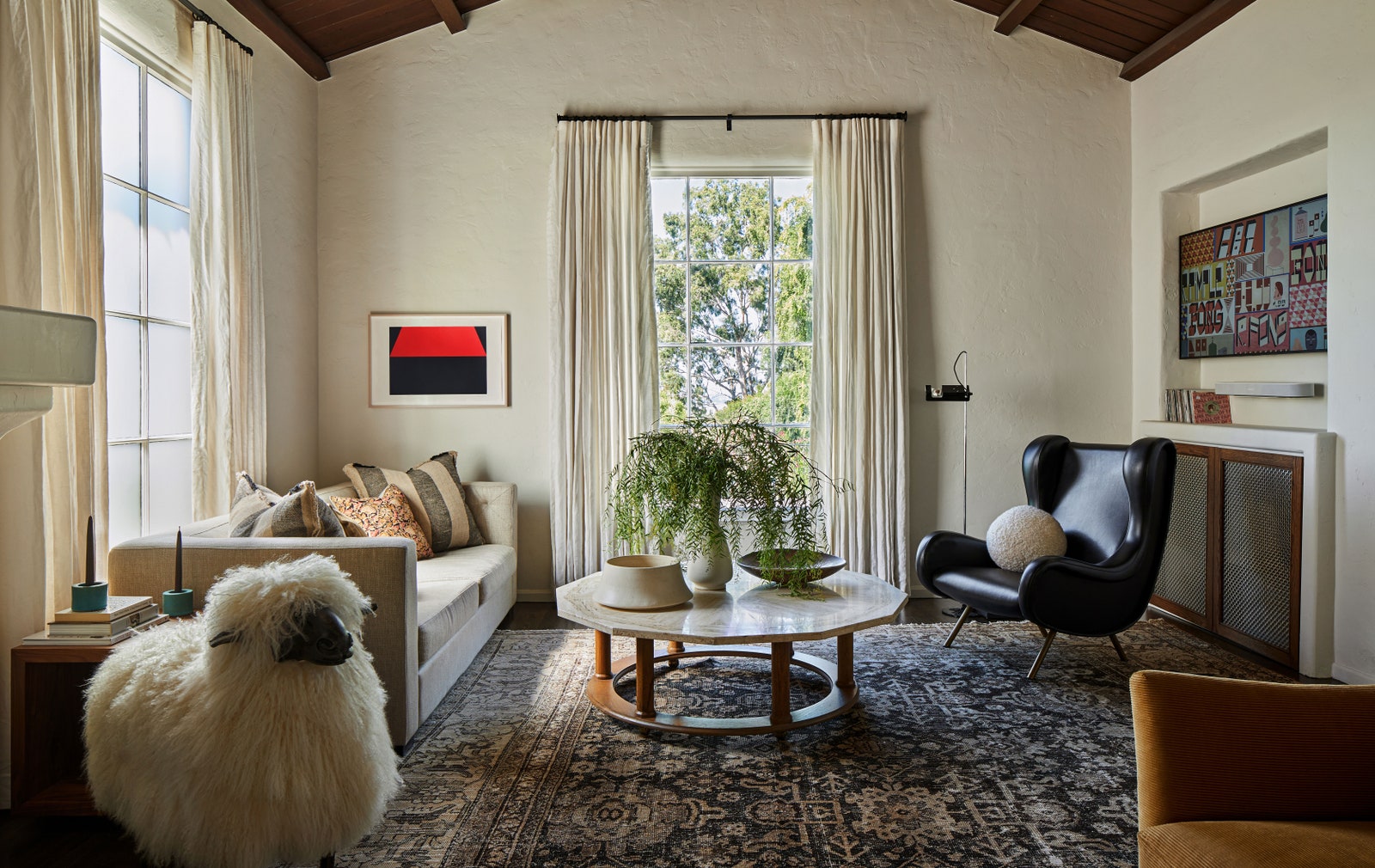 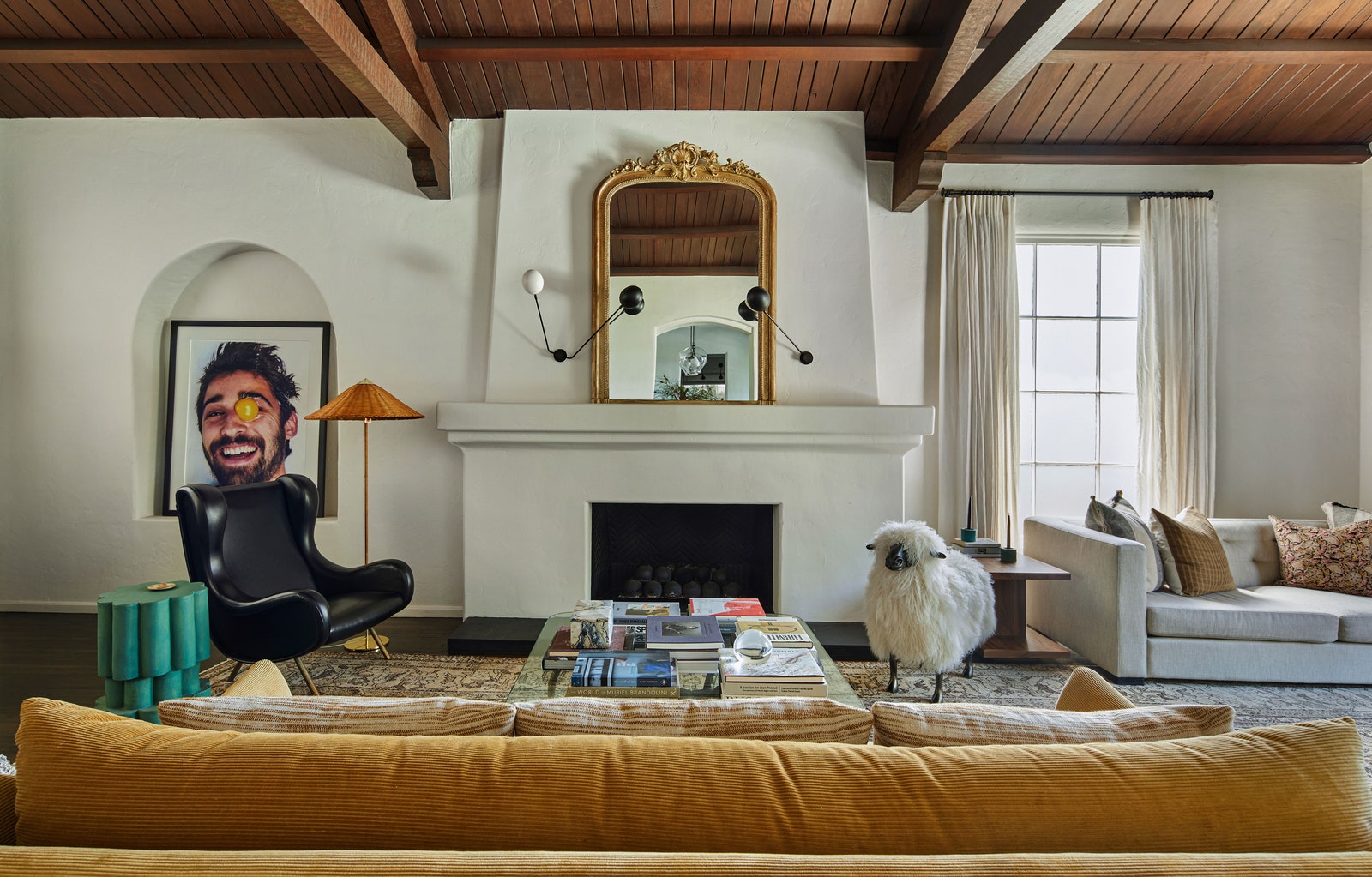 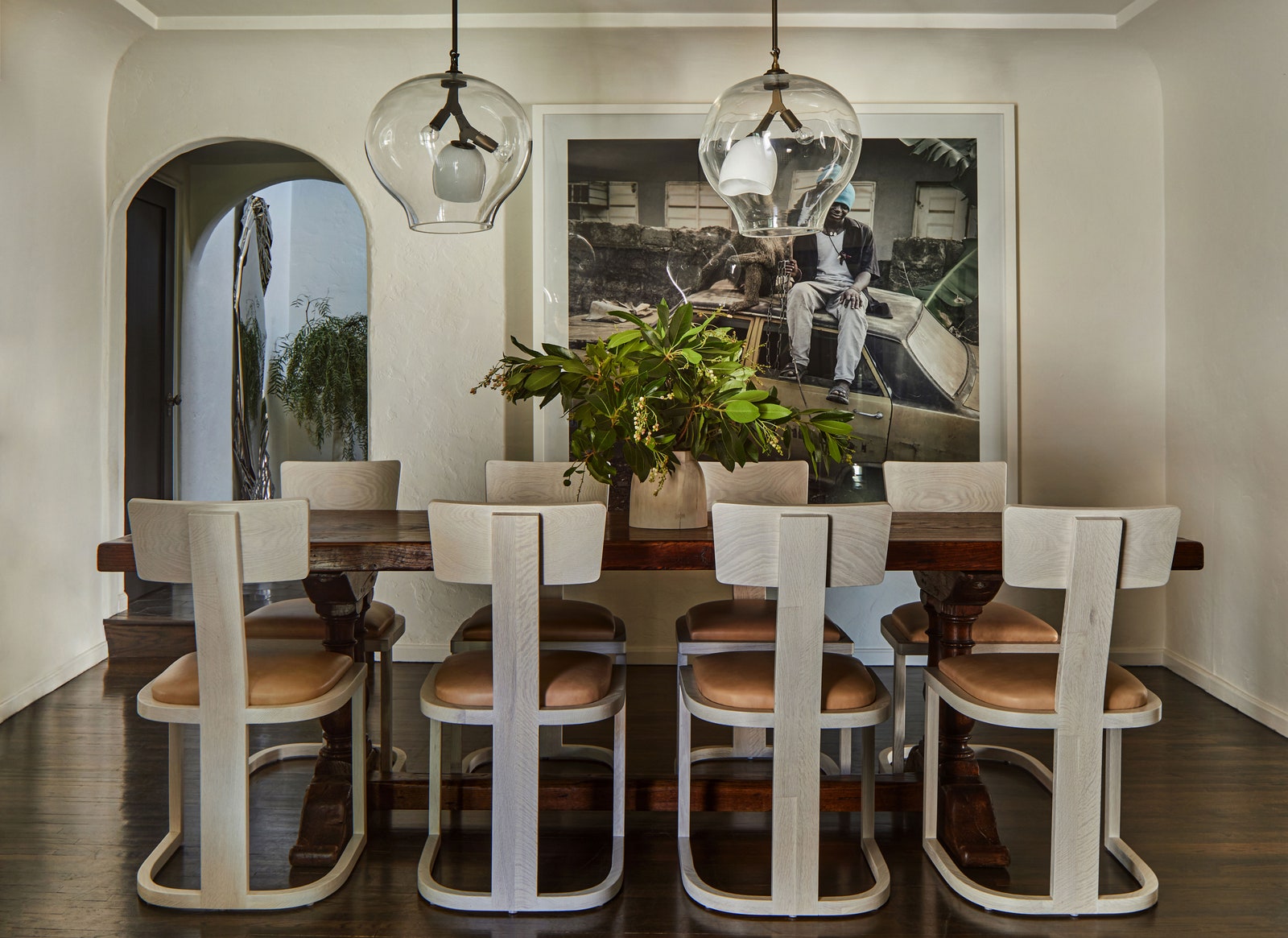 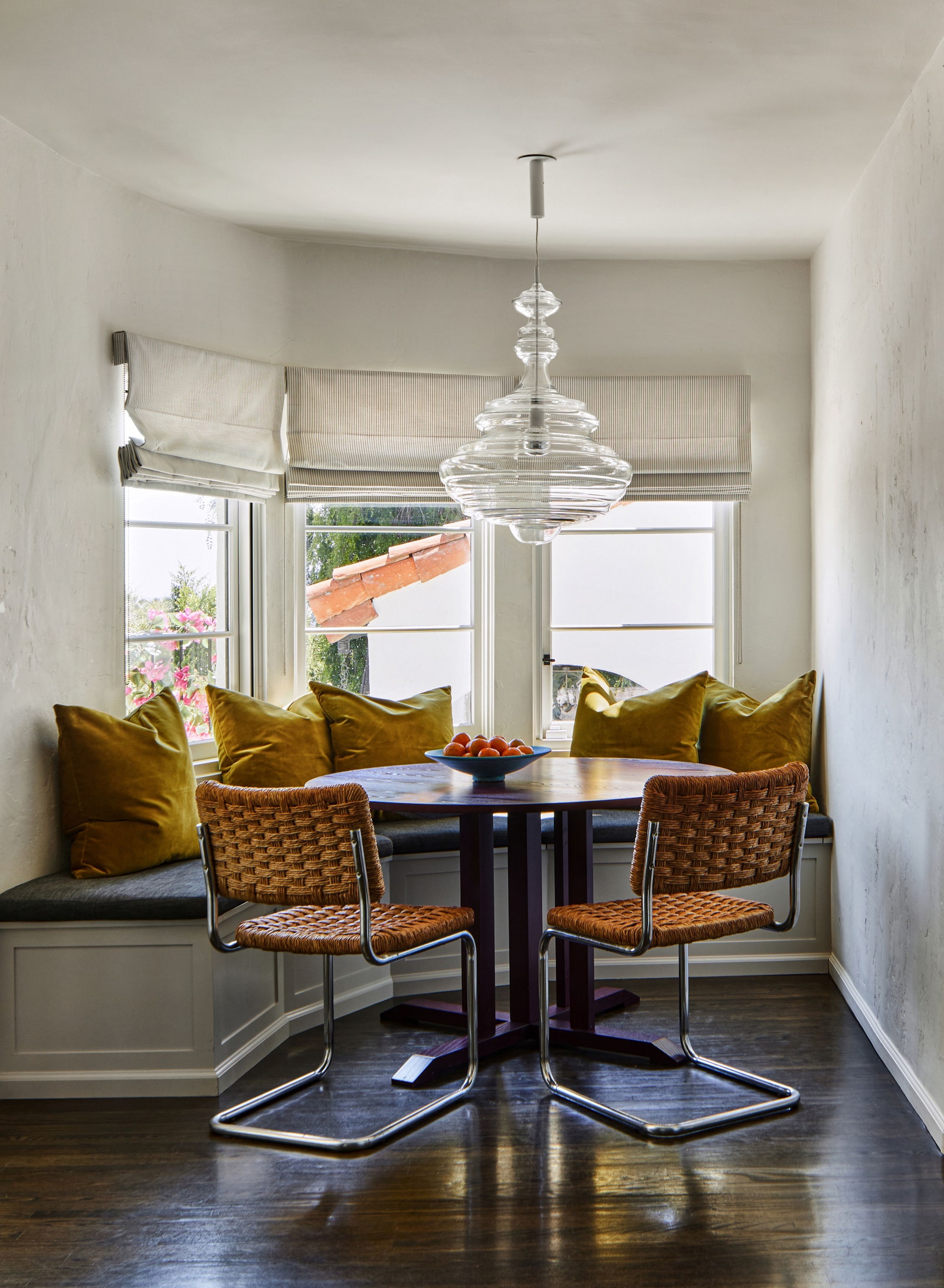 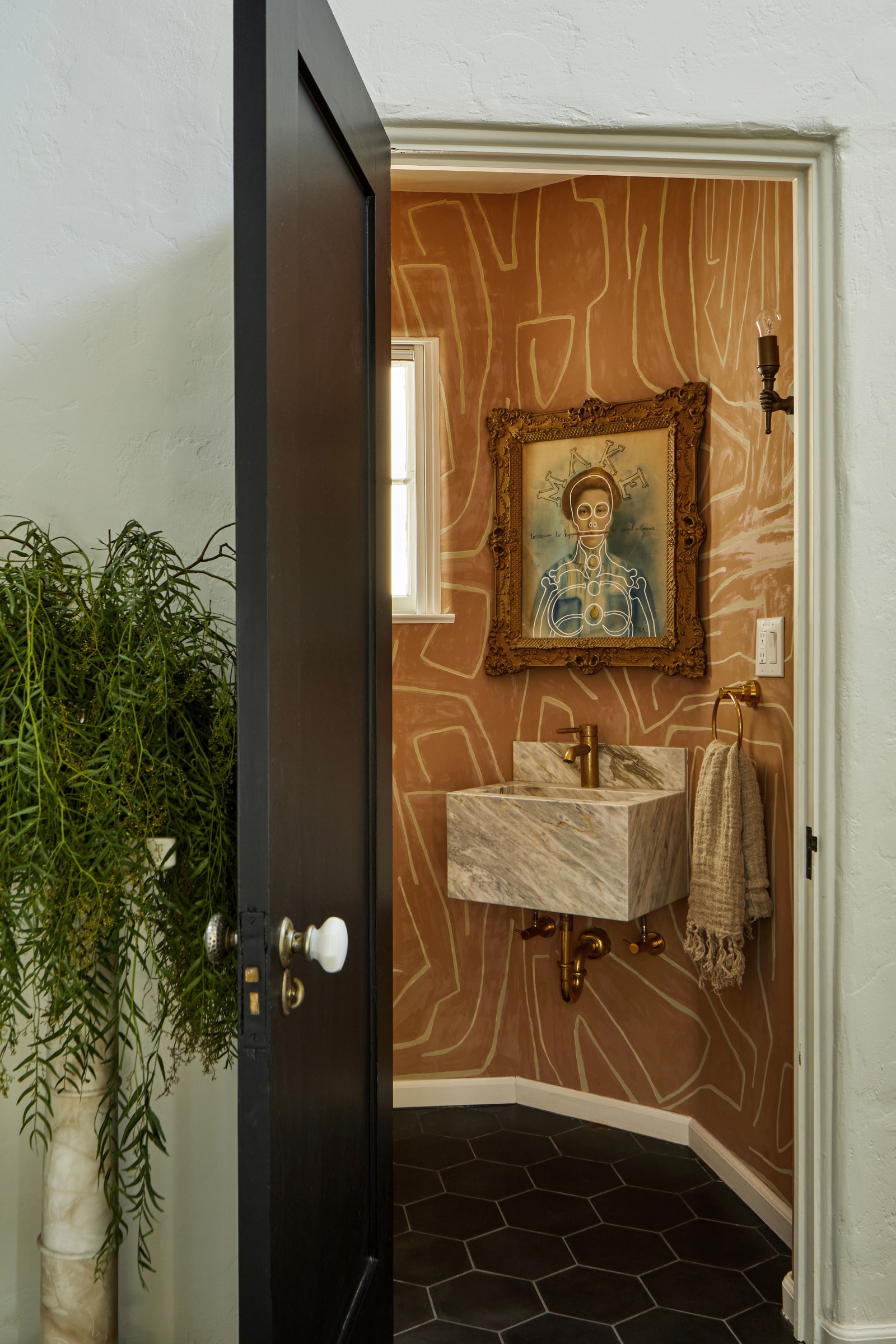 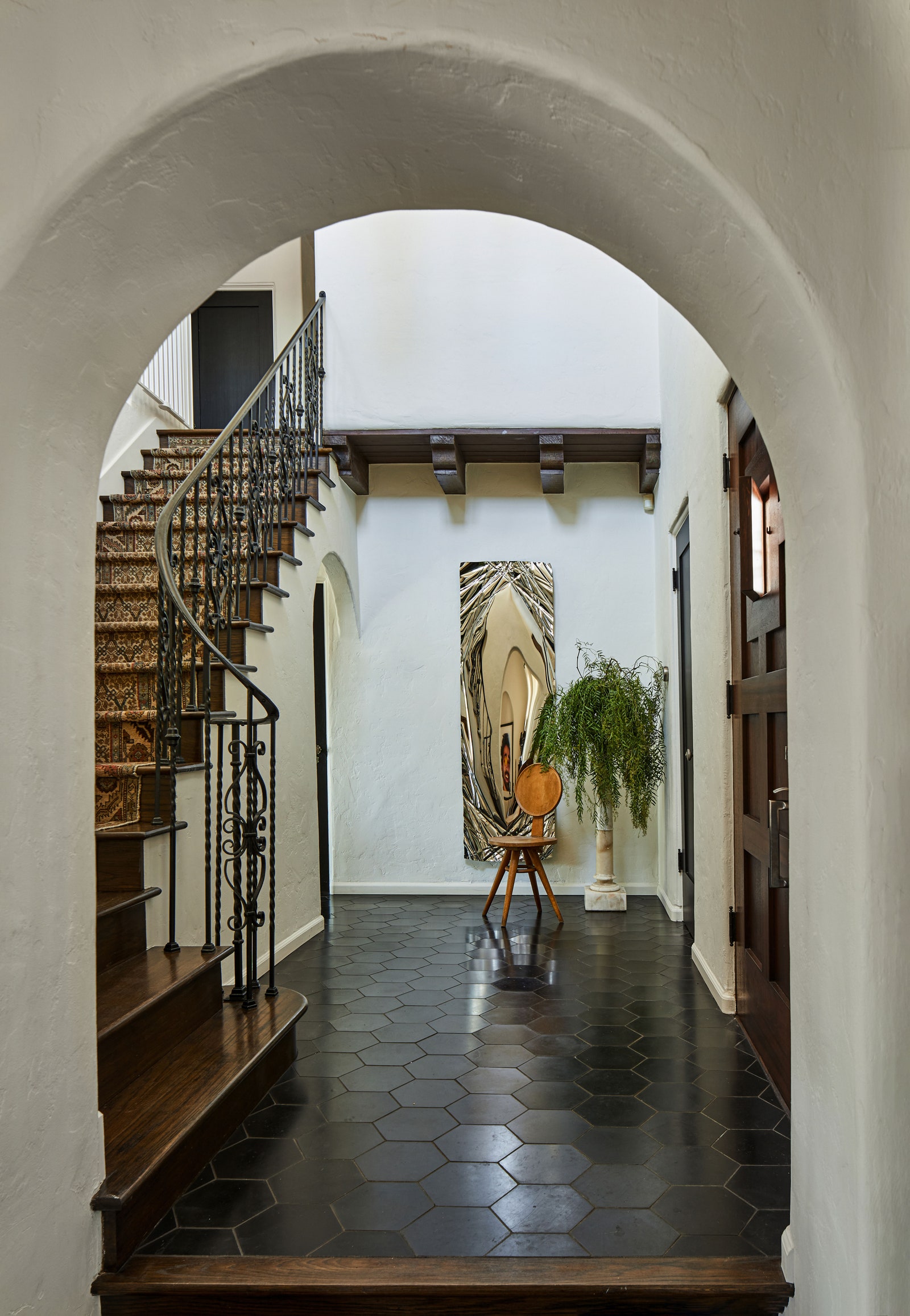 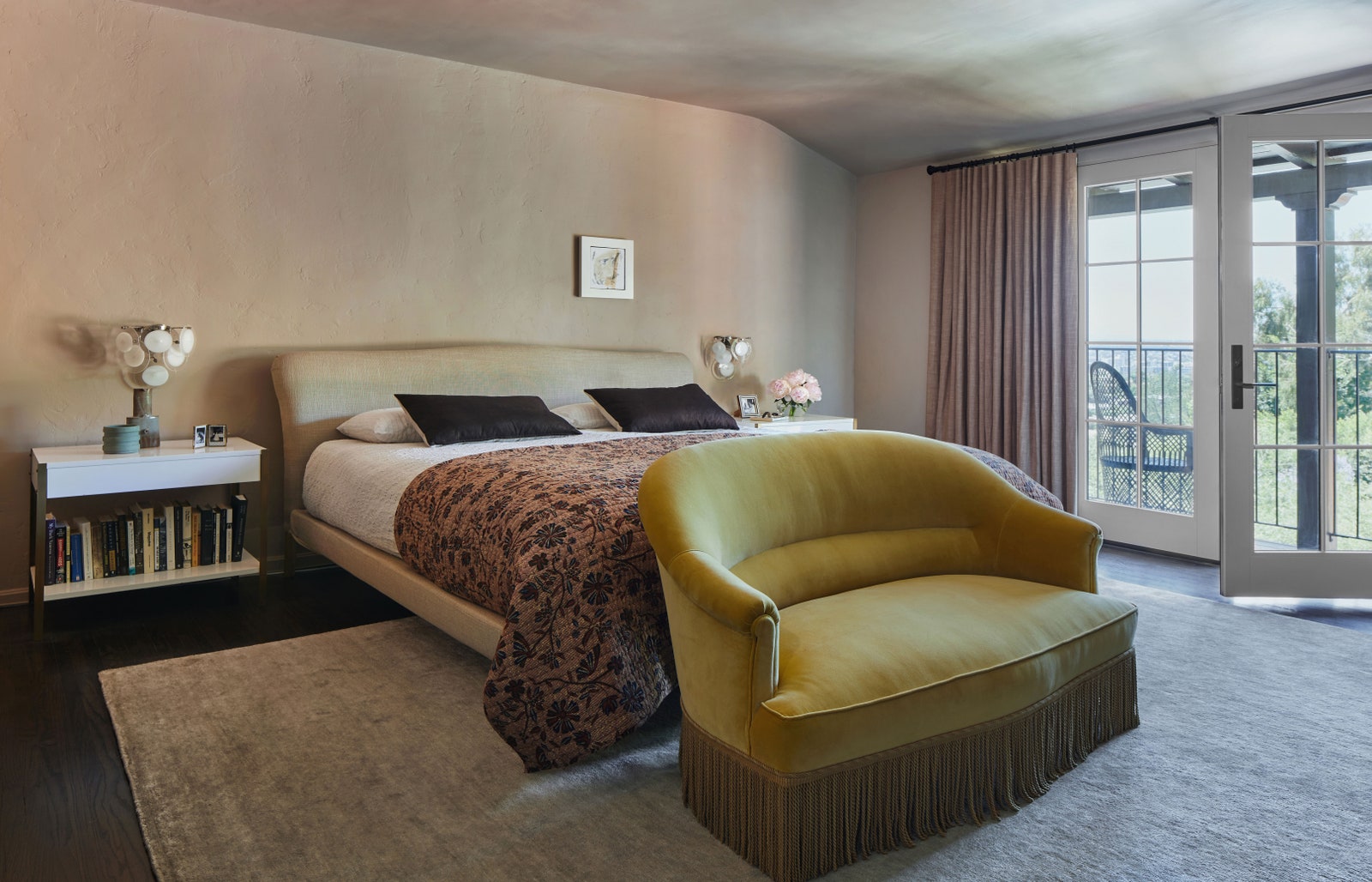 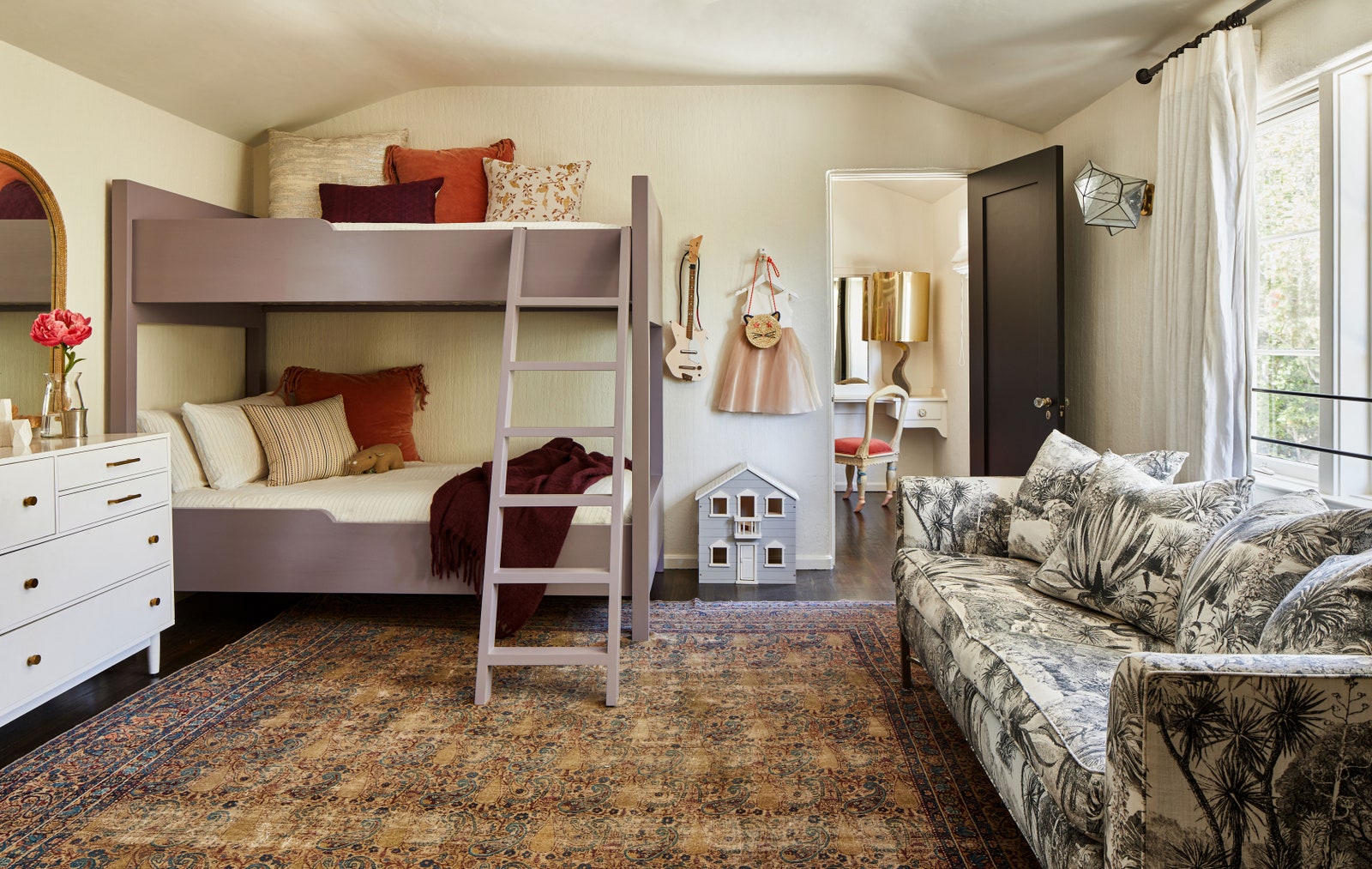 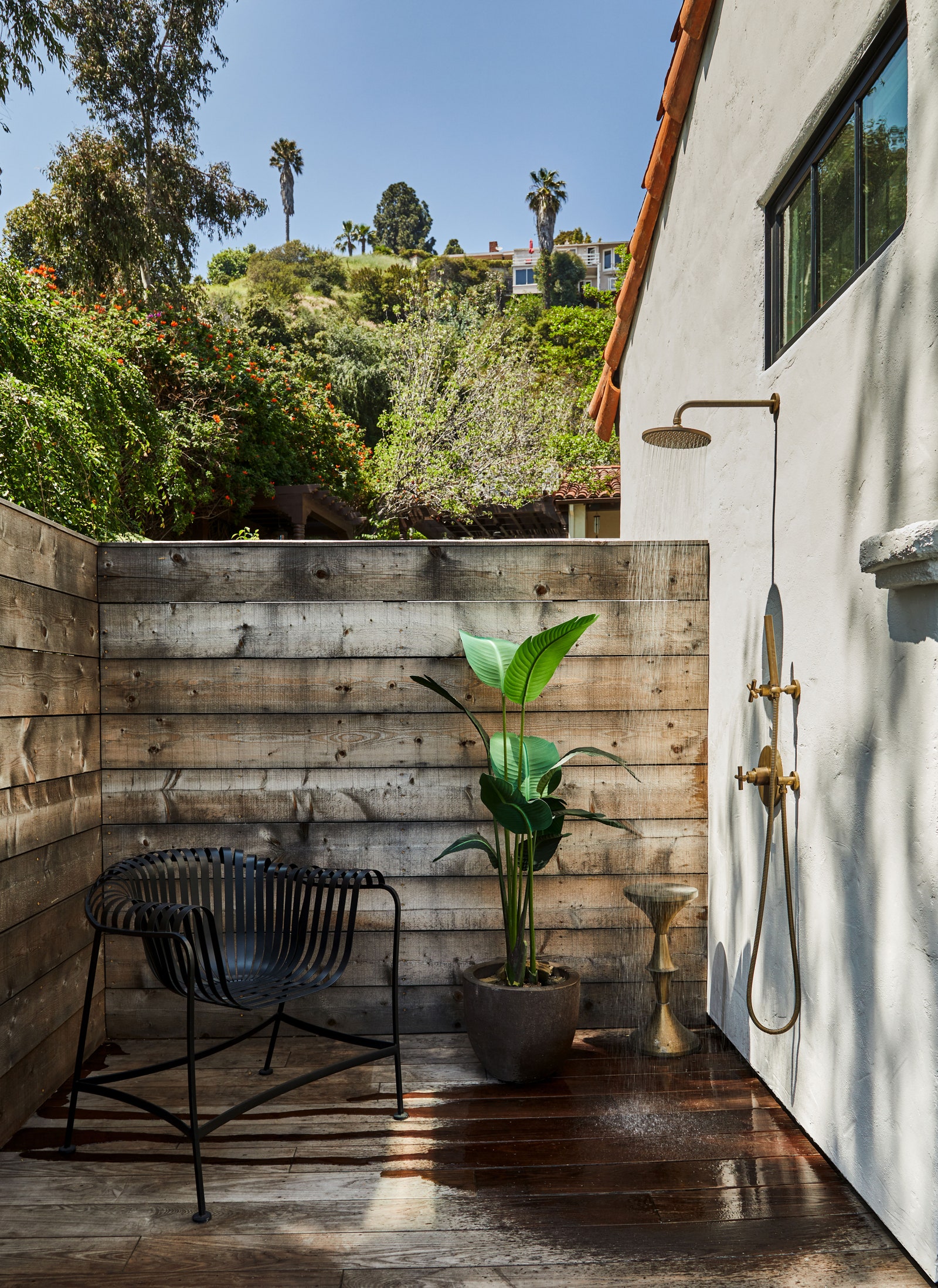 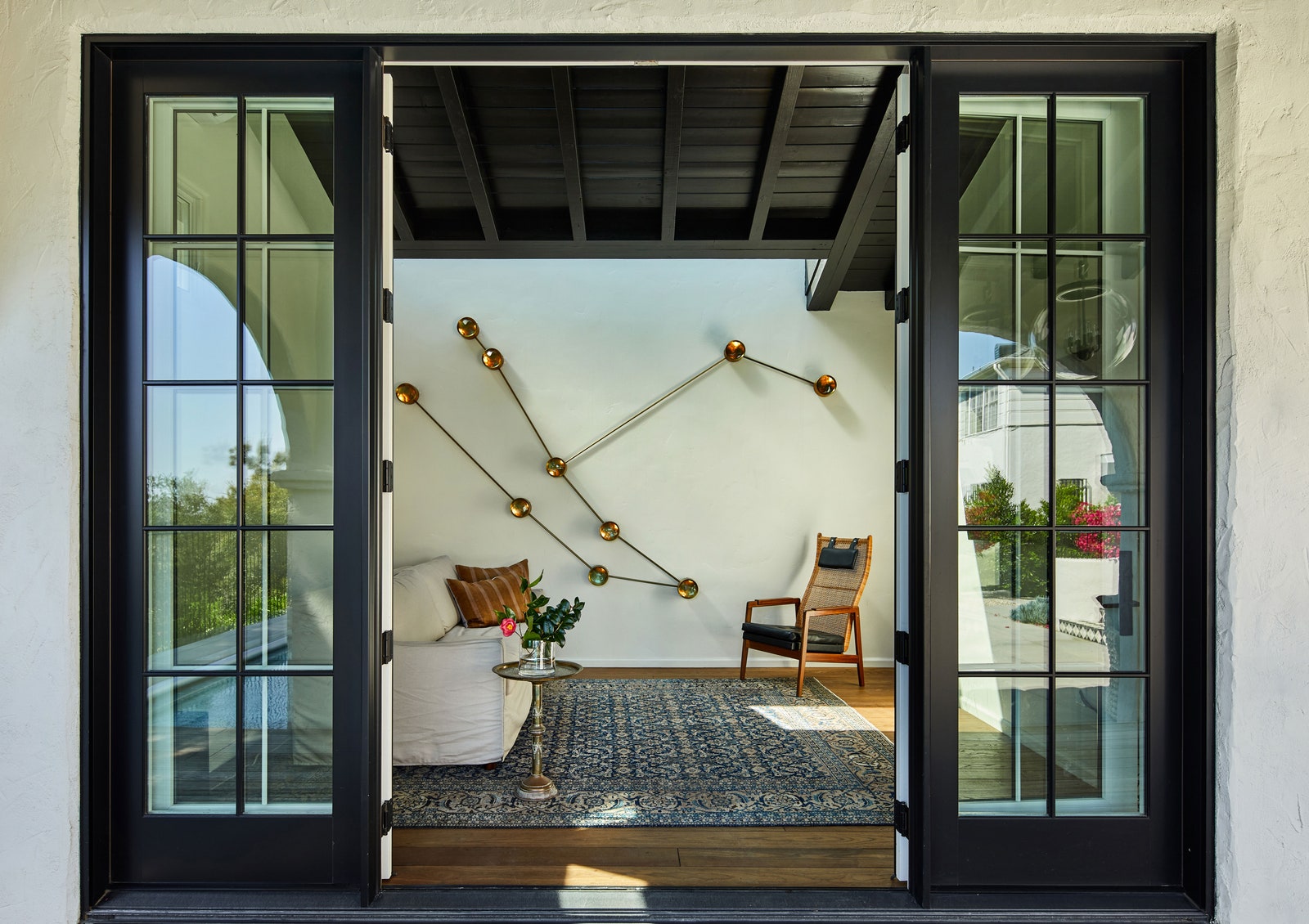 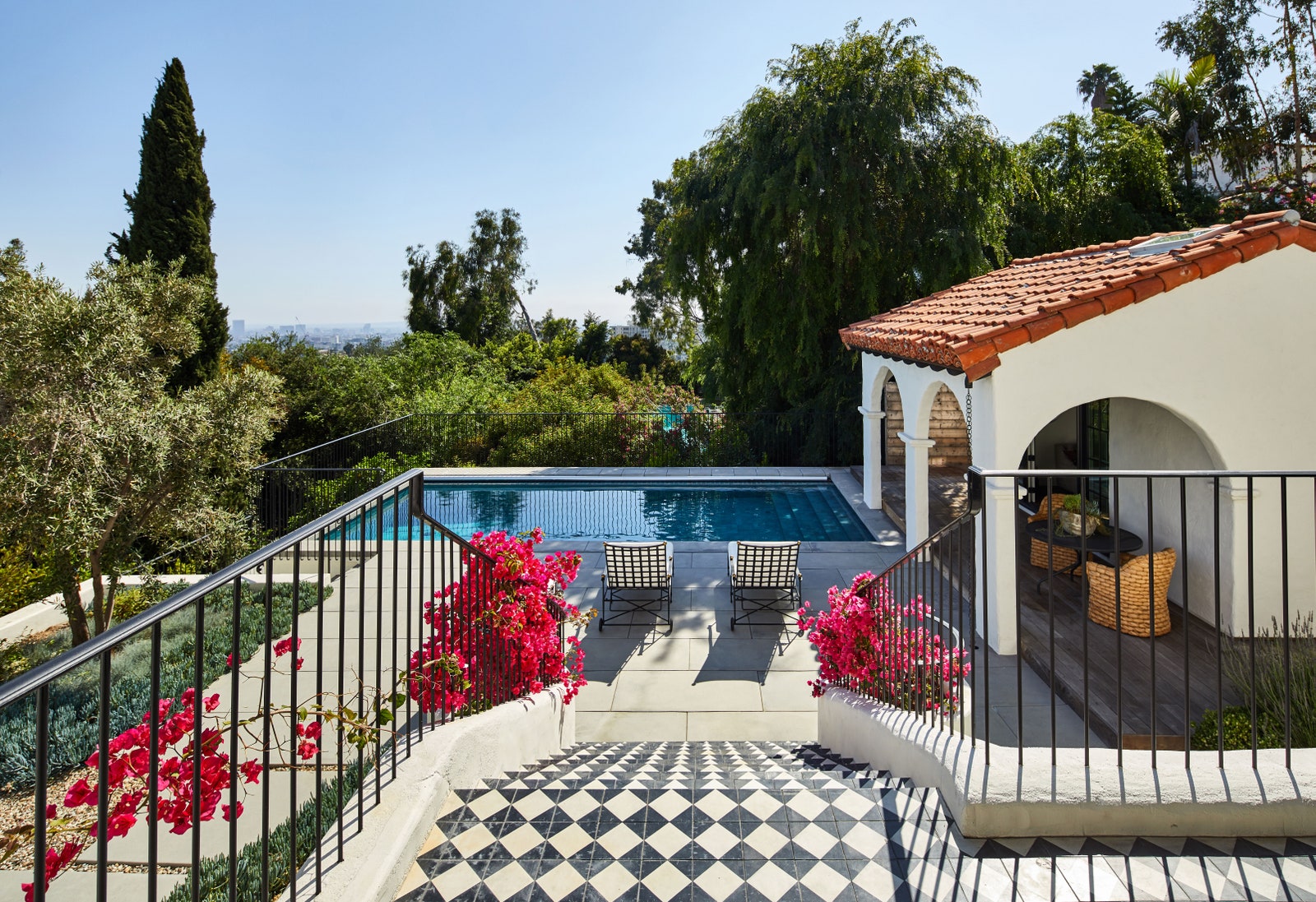 A work by the celebrated Cuban-American abstractionist and minimalist artist Carmen Herrera anchors one end of the living room. A Marco Zanuso lounge chair pairs happily with a Joe Colombo floor lamp and a vintage decagonal Henredon cocktail table of travertine, oak, and brass.

To make better use of the difficult hillside site, Proem enlisted architects Peggy Hsu and Chris McCullough of the L.A. firm Hsu McCullough, whose scope of work included a new pool—a daunting task that required caissons and piles between 80 and 100 feet long—a pool house, and a stairway-porch connector to ease the transition between the main house and the freshly pioneered outdoor playland. “The forms and materials of the new additions, the tile roof and arches of the pool house, the iron balustrade and harlequin tile of the stair, work within the existing language of the house,” Hsu explains. Nevertheless, the architects’ disciplined deployment of those forms and materials keeps the project from becoming a dry exercise in historical verisimilitude or twee nostalgia. Everything feels attuned to the rituals and rhythms of a young creative family.

“It feels good to do this project at this point in my life,” Trohman concludes. “I’m in my 30s, I have two kids, basically I have a better feel for who I am and how I want to live.”