The Ultimate guide to Nordic Design

We have built the ultimate guide to Nordic design and designers, let's start with designers. Hugo Alvar Henrik Aalto (pronounced [ˈhuːɡo ˈɑlʋɑr ˈhenrik ˈɑːlto]; 3 February 1898 – 11 May 1976) was a Finnish architect and designer.[1] His work includes architecture, furniture, textiles and glassware, as well as sculptures and paintings. He never regarded himself as an artist, seeing painting and sculpture as "branches of the tree whose trunk is architecture."[2] Aalto's early career ran in parallel with the rapid economic growth and industrialization of Finland during the first half of the 20th century. Many of his clients were industrialists, among them the Ahlström-Gullichsen family.[3] The span of his career, from the 1920s to the 1970s, is reflected in the styles of his work, ranging from Nordic Classicism of the early work, to a rational International Style Modernism during the 1930s to a more organic modernist style from the 1940s onwards.

Typical for his entire career is a concern for design as a Gesamtkunstwerk, a total work of art, in which he – together with his first wife Aino Aalto – would design the building, and give special treatment to the interior surfaces, furniture, lamps and glassware. His furniture designs are considered Scandinavian Modern, in the sense of a concern for materials, especially wood, and simplification but also technical experimentation, which led him to receiving patents for various manufacturing processes, such as bent wood.[4] As a designer he is celebrated as the inventor of bent plywood furniture.[5] The Alvar Aalto Museum, designed by Aalto himself, is located in what is regarded as his home city Jyväskylä.[6]"

Most notably he designed items For Artek, a Finnish designer brand. One the most iconic items he designed is Stool 60: Kaare Klint (15 December 1888 – 28 March 1954) was a Danish architect and furniture designer, known as the father of modern Danish furniture design. Style was epitomized by clean, pure lines, use of the best materials of his time and superb craftsmanship.

He was the son of the equally influential architect Peder Vilhelm Jensen-Klint whose monumental Grundtvig's Church he completed after his father's death in 1930."

One of the most items he designed must be the Faaborg Chair: Poul Henningsen (9 September 1894 - 31 January 1967) was a Danish author, critic, architect, and designer. In Denmark, where he often is referred to simply as PH, he was one of the leading figures of the cultural life of Denmark between the World Wars.

He is most commonly associated with his design of the PH-lamp series of glare-free, shaded lamps.[1][2][3] His lamps used carefully analyzed reflecting and baffling of the light rays from the bulb to achieve illumination that was not harsh and glaring but shed warm, soft light.[4] His light fixtures were manufactured by Danish lighting manufacturer Louis Poulsen, a company with which Henningsen would build a lifelong working relationship.[5][6] His novel works of Danish modern designs are featured in many museums."

One of his most famous design, the Artichoke lamp: "Josef Frank was of Jewish ancestry. His parents, merchant Ignaz (Isak) Frank (October 17, 1851 – January 27, 1921 Vienna) and the Vienna-born Jenny (September 3, 1861–10 February 1941 Vienna), were originally from Heves in Hungary. He designed his parents' grave in the old Jewish section of Vienna's Central Cemetery (Group 19, Row 58, Grave No.52).[1] He studied architecture at the Vienna University of Technology. He then taught at the Vienna School of Arts and Crafts from 1919 to 1925. He was a founding member of the Vienna Werkbund, initiator and leader of the 1932 project Werkbundsiedlung in Vienna. In 1933, he emigrated to Sweden, where he gained citizenship in 1939. He was the most prestigious designer in the Stockholm design company Svenskt Tenn (Swedish Pewter), recruited by the founder of the company, Estrid Ericson. He remained in Sweden after 1945 despite attempts to return him to Vienna. The Vienna Circle manifesto lists three of his publications[2][3][4] in a bibliography of closely related authors. He was also the brother of the physicist, mathematician, and philosopher Philipp Frank."

One of the most celebrated pattern from him: "Magnusson-Grossman was born Greta Magnusson on July 21, 1906 in Helsingborg, Sweden.[1]

Magnusson descended from a family of Swedish cabinetmakers, and was a woodworking apprentice at furniture manufacturer, Kärnans in Helsingborg after she graduated from Ebba Lundbergs Högre.[4] During her apprenticeship in Helsingborg, she was the only female in the workshop. Grossman recognized the drawbacks of being a female artist and stated that she felt she had, "to be a step ahead or else". In 1928, Magnusson went on to study Furniture Design at Konstfack in Stockholm.[5] She later studied architecture at the Royal Academy of Technology in Stockholm.[3]

In 1933, she won the Furniture Design award from the Swedish Society of Industrial Design, becoming the first woman to win the award. That same year, she married the British jazz musician and band leader Billy Grossman in 1933.[6] They had no children.[7]" Finn Juhl was born on 30 January 1912 to an authoritarian father who was a textile wholesaler representing several English, Scottish and Swiss textile manufacturers in Denmark, and a mother who died shortly after he was born. From an early age he wanted to become an art historian, already as a teenager spending much time at the Statens Museum for Kunst and in spite of his young age receiving permission to borrow books at the Ny Carlsberg Glyptotek, but his father convinced him instead to pursue a career in architecture.[1] He was admitted to the Architecture School at the Royal Danish Academy of Fine Arts where from 1930 to 1934 he studied under Kay Fisker, a leading architect of his day and noted lecturer.

After graduating, Juhl worked for ten years at Vilhelm Lauritzen's architectural firm, where he had also apprenticed as a student. In close collaboration with Viggo Boesen, Juhl was responsible for much of the interior design of the national broadcaster Danmarks Radio's Radiohuset, one of the firm's most high-profile assignments during those years.[2]

Juhl made his debut in 1937 when he commenced a collaboration with cabinetmaker Niels Vodder which would continue until 1959 and exhibited at the eleventh Copenhagen Cabinetmakers' Guild Exhibition. Therefore, his early chairs were originally produced in small numbers, eighty at most, because the Guild shows emphasized the work of the artisan over the burgeoning industry of mass production. However, they were almost all reissued later in his career.[3]

He married Inge-Marie Skaarups on 15 July 1937 but they later divorced.

The Guild Exhibitions were an important venue for the young designers who sought to renew Danish design, turning their backs on the traditional historicist styles, heavy and with ornaments and plush, instead creating modern furniture which fitted the new trends in architecture. The projects was highly controversial and Juhl's first work met much criticism. His Pelican chair, designed in 1939 and first produced in 1940, was described as a "tired walrus" and "aesthetics in the worst possible sense of the word".[4] In spite of the initial criticism, Juhl's work began to influence the style of homes abroad throughout the 1940s. In Denmark, however, his popularity did not reach that of his peers, Børge Mogensen and Hans Wegner, who were less radical in their designs and relied more on Kaare Klint, leader of the furniture school at the Academy and the Nestor of modern Danish furniture design.[4] 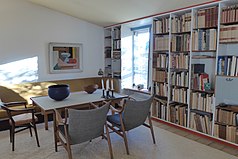 In 1942 Juhl designed a house for himself, today known as Finn Juhl's House, and had it built with money inherited from his father. Over the years, it was increasingly furnished with creations of his own design. 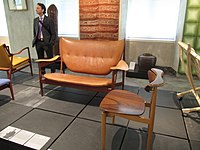 In 1945 he left Vilhelm Lauritzen Architects and set up his own design practice, in Nyhavn in Copenhagen, specializing in interior and furniture design. However, his work in furniture design began earlier than that. He also became a teacher at the Danmarks Designskole in 1945 and would continue to teach there until 1955.

In 1948 Edgar Kaufmann, Jr., leader of the Department for Industrial Design at the Museum of Modern Art in New York, toured Scandinavia. He intentionally did not visit only the big Scandinavian exhibitions, but being impressed by Juhl's work he presented it in a large article in the Interiors magazine. In 1951 he participated in the Good Design exhibition in Chicago. In connection with the show he was quoted in Interiors for stating that "One cannot create happiness with beautiful objects, but one can spoil quite a lot of happiness with bad ones". The work he did for them, 24 pieces including chairs, tables, storage units, sideboards and desks, represented his first successful marriage of modern mass production to his traditionally high craft standards.

In 1950, Baker Furniture Company of Grand Rapids, Michigan approached Juhl about producing his designs in their America factory. Initially skeptical of American craftsmanship, Juhl was assured after visiting Grand Rapids and agreed to the arrangement. Baker Furniture marketed Juhl's furniture under the 'Baker Modern' line.[5]

In 1951–52, he designed the Trusteeship Council Chamber in the Headquarters of the United Nations in New York City. The Government of Denmark contributed approximately $20,000 towards its construction.[6]

At the Milan Triennial in the 1950s, he won a total of five gold medals, further adding to his international reputation. During this decade he continued to design more specifically for the mass market than had been the case in the 1940s.

From 1961 he lived in a common-law marriage with Hanne Wilhelm Hansen,[7] a member of the family behind the Edition Wilhelm Hansen music-publishing house.

In his career, Juhl also designed refrigerators for General Electric, glassware, ceramics, and was the interior designer for the United Nations Trusteeship Council Chamber in New York City.

In 1965 he was a visiting professor at the Institute of Design in Chicago.[7]" According to the official Verner Panton site, verpan:

Among the giants of Danish design, Verner Panton (1926-1998) established a unique reputation for his exuberant originality and tireless experimentation. Panton created lamps, furniture and textiles – and was also a sought-after interior designer. Although he was at the forefront of mid-century Danish Modern, Panton’s contribution was anything but mainstream. He enthusiastically embraced new materials, he splashed with a bold colour palette, and he playfully imbued many of his sculptural creations with a strong graphical expression – without ever compromising on quality or workmanship. Panton’s iconic designs have emerged as contemporary design classics – as strikingly inventive now as they were 50 years ago."